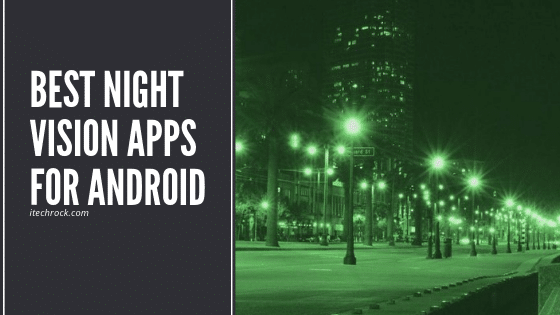 Night Visions Apps: The camera technology in Smartphones has developed a lot over the years. Today, we’ve got tons of smartphones with extraordinary camera sensors that allow users to take clear photos and videos. However, when it comes to capturing pictures in the dark or low lighting conditions, it’s still a pain for the camera to perform. It’s quite difficult for the Camera sensors to capture anything where the lightning is very minimal. But, the good thing is that you can overcome this odd with the help of Best Night Vision Apps For Android.

Night Vision Apps on Android enables users to take clearer photos and videos during night times or in dark conditions. The engineering behind these apps and the way it works is no less than a mystery. You should try the following Night Vision Apps on your Android if you’re into the mobile photograph and stuff.

The Night Visions Apps mentioned in this article are solely handpicked based on their features and user experience.

Thermal Night Vision is an excellent app when it comes to shooting videos and capturing photos in dark lighting conditions. The app uses your device’s camera hardware capabilities to take brilliant photos and allows you to add extra effects, customize brightness levels, etc. It also consists lot of settings that you can make to improve your shots in dark conditions such ISO levels, HDR, Thermal Filters, etc. You just have to spend some time playing around with the settings to understand the options in the Thermal Night Vision. Besides that, everything else is well managed by the App.

This one turns your camera into a thermal camera and enables you to take detailed pictures at night. The best part thing in this app is the customizable options; Users can control the saturation levels, Exposure levels, Change ISO, 8x Zoom, etc. On your first launch, the app will walk you through all the features of the app and guide you on how to use its features effectively. Another good thing to note is the no lag/delay feature while capturing photos in the dark. So, even if you’ve got a low-end Android device, the app can still do wonders while taking dark shots.

Night Vision Simulator comes in two packages, i.e., Free version, and paid version. Well, there aren’t any major difference between the Free version and Paid version except the photo sharing and no advertisements facility. It improves the quality of photos that your device captures in the dark conditions to a great extent. Of course, the final photo result depends on the camera of your device, but the app does help in making your photos brighter. The app enables your device’s camera to rotate up to 180 degrees and automatically manages the dimming and brightening levels to produce a better photo. Go ahead and try out the free version of the Night Vision Simulator on your Android device.

Illumes Lite is a multi-feature packed app that works both as a selfie camera and night camera. It’s the same as the other apps mentioned in the article, but with some extra features such as Fun effects, add stickers, social media sharing, etc. You can make use of your device’s volume buttons to Zoom in or Zoom out while taking pictures. Illumes Lite has a clean interface and simplistic user-navigation system. The only downside is the Advertisements in the Lite version, but there’s an option to get rid of them by opting to the paid version. The paid version includes other features as well such as Set Timer, Selfie Effects, Auto Focus, etc.

Night Mode Camera is a photography app that allows users to capture moments even in the lowest luminosity conditions. First off, the Night Mode Camera app doesn’t take raw photos in dark conditions like the other apps. The app uses its AI capabilities to edit the photo after it’s taken. As a result, you will get a more enhanced and detailed picture on your Android device. The app also allows you to dynamically change the sensitivity levels in real time, and zoom up to 8x to achieve to a best possible result. In terms of video capturing, the app again uses its AI feature to process the scenes and makes them look brighter. You can shoot videos in the 1080p screen without any lags.rt

There are hundreds of Night Vision Apps available in the Google Play Store to download. But, most of them do not improve the photo quality or require a high-end device to function. That’s why it’s hard to pick the right one out of all. But, I hope, by now you’re able to pick the right Night version that meets your requirements. Let us know which one of them is your favorite and your experience with it in the comments section.