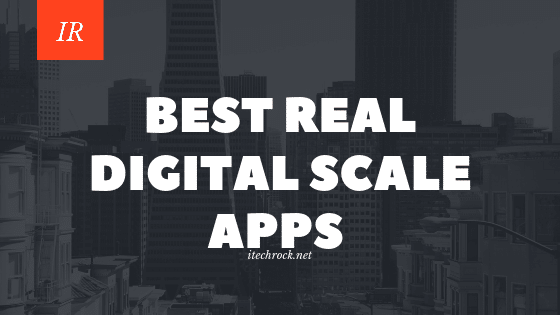 Top Digital Scale Apps: There are quite a lot of utility applications available in the Google Play Store that helps in making our lives convenient. Digital Scale apps can be taken as the best example for it. In case, if you didn’t know, Digital Scale applications help you weigh small objects such as Salt, Pepper, Powder, etc. Such applications will turn on your Android device into a digital weighing scale. In case, if you think there’s some magic or anything as such behind it, then let me tell you such apps use a sensor of your device called Accelerometer to give you an estimated weight.

Digital Scale Apps are sure very useful, however, they cannot replace the actual weighing scale. In case, if you’re just looking for approximate numbers, rather than accurate, then Digital Scaling Apps will definitely come in handy. Today, in this article, we’ve gathered the Best Digital Scale Apps that will help you in weighing small objects.

Kitchen Scale is probably the most accurate Scaling App available in the entire Google Play Store for Android devices. The app has been downloaded by thousands of users and has been rated as the most precise weighing app by its users. As of now, it allows you to weight basic kitchen ingredients such as Salt, Pepper, Sugar, Flour, etc.

You just have to place the objects on your screen, the app will instantly measure the weight and give you approximate weight. As soon as you remove the object, the scale would automatically go down to zero. It’s such a cool to try out, most of the time it produces close to accurate results.

Precision Digital Scale is another cool Digital Scaling App that you can try out on your Android device. The app lets you weigh pretty much any object by using your device’s accelerometer. The good thing about this app is that measures the weight in real time. You just need to go through the calibration process after you install the precision digital scale app on your android device.

Once the setup is complete, the app would start working. It will weigh the objects as per the pressure, you can test it out by placing simple objects on your device. The App does not contain any pro or in-app purchases. However, there are advertisements placed by the developer to support the development.

Scales Meter Weight a free digital scale app available in the Google Play Store. The app has the capacity of weighing objects up to 500 grams without any issues. Most people use the app to get an approximate weight of powdery items such as Flour, Baking soda, etc. But you can try placing other basic items as well, such as pencil, Pen, etc.

The App can weigh anything that isn’t 500 grams. If you place an object that’s heavier than 500 grams, then the numbers would be pretty inaccurate and randomly keep changing. Apart from that, there’s no drawback of this app to complain. Go ahead and try it out yourself.

If you’re looking for a well-designed app that can weigh small things for you, then Digital Scale Simulator is what I suggest. The App comes with a green colored cool-looking interface and smooth navigation. Although, there isn’t much to talk about this app. It just contains a simple home screen where all the information will be displayed if you place any object on your screen.

The app can be installed for free from the Google Play Store and does not involve any payments. It’s a simple weight calculator, developed for Android devices. The team behind the app still support the app and are making improvements from time to time.

IQ Digital Scale is an ideal app which is mostly used for weighing certain food items. The app comes with a simple scale bar, which would start moving once an object placed on the device’s screen. Talking about accuracy. the app isn’t nearly as accurate as other apps mentioned in this article. However, for the most part, it does a decent job in weighing small things.

IQ Digital Scale is compatible with almost all Android devices and there are no special requirements to use the app on your Android device. So, give it a shot and see if it meets your expectations.

Top Digital Scaling Apps can be very useful if you don’t have an actual weighing scale. The results produced by digital scaling apps would be close to that of an actual weighing scale. The app which we’ve mentioned in this article are all free, you can get them from Google Play Store. So, go ahead and try out Best Digital Scale Apps, let us know which one you liked the most in the comment section.